Over the last three decades, there has been a fundamental paradigm shift in the museum field across the world that places people, and their stories and not just objects at the core of their mission and purpose. This means that museums are beginning to listen to their communities in how they can better serve them and gradually become more socially responsible.There is an increasing need for relevance that has driven these changes, resulting in a balance shift between objects and stories. No two museums are the same, they play different roles in play different places.

But museums that are socially responsible all have one thing in common: they have a passion to create social value. They go beyond research, collecting, and preserving by regarding these activities as a means rather than as ends. 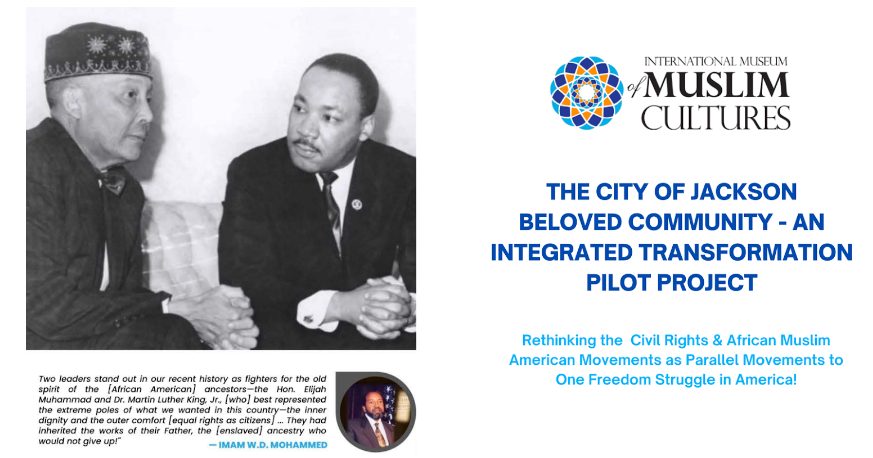 As a socially responsible museum, IMMC has at its core always held a powerful commitment to education. In particular, IMMC has always engaged with people who suffer from racism, economic and social disadvantages, and discrimination that renders them vulnerable in the community we serve.

IMMC’s transformative solution-based model connects the Civil Rights and African American Muslim Movements as parallel movements to one freedom Struggle in America. The focus is on the convergence of these two movements—through the transformative leadership of Dr. King and Imam W. Deen Mohammed—as having produced a unique religious-based social justice model for creating the Beloved Community that both men aspired to.

The Muslim version of Beloved Community is Prophet Muhammad who created the first “religious freedom and self-determination” governing constitution in history, the Constitution of Medina—establishing the city-state of Medina in 622 CE. It constituted a formal peace agreement with the Jewish community and later Christians and others.

Dr. King affirmed that “a genuine revolution of values means in the final analysis that our loyalties must become ecumenical [and inter-religious]. Every nation must develop an overriding loyalty to mankind as a whole and call for a worldwide fellowship that lifts neighborly concerns beyond one’s race, class, and national borders to an all-embracing and unconditional love for all mankind…” Imam Mohammed’s message was the same.

To address the inequities in Jackson and Mississippi, we must first address the root causes of a system of structural racism (human hierarchy) and white Supremacy. This begins by recognizing that human dignity is fundamental to combating injustice and intolerance and achieving racial equity, social justice, and healing. When individuals “are not conscious of what it means to be human or lose a sense of human value, life’s most potent motivation is lost”, Imam Mohammed asserted.

IMMC’s unique, multifaceted, and integrated approach redefines the problem as going beyond race to a reclaiming of human dignity for all. Defining dignity as “inherent nobility, honor, worth, born sense of leadership and self-governance”. IMMC advocates for the individual’s right to life with dignity, freedom, and self-determination to grow and develop, through knowing God/The Creator and the human being’s free access to Him. That is the right “to assume among the Powers of the Earth, the separate and equal station to which the Laws of Nature and Nature’s God entitle them”, (U.S. Declaration of Independence). Through this Project IMMC challenges the status quo, to take seriously the religious and spiritual aspects of dignity, equity, and social justice—the Laws of Nature and Nature’s God.

To learn more about the program and how you can get involved, please email Najla Sharieff, Project Manager at najla.sharieff@muslimmusuem.org

Subscribe and be the first to know about our exhibitions, events, and activities.