The International Museum of Muslim Cultures held its first virtual fundraising gala on December 30, 2020 to celebrate the museum’s 20 years of service to the local and national community. Curated and hosted by the museum’s Deputy Executive Director, Lina Ali, the program featured a fascinating array of art and cultural performances from song and dance, including a wonderful harp performance by Destiny Muhammad in the San Francisco Symphony, to a live calligraphy demonstration all the way from China by the wonderfully talented Haji Noor Dean. The program also consisted of a photo documentary series featuring the personal and unique stories of the founding families of the museum, a virtual textile exhibition of Islamic wedding dresses curated by Lina Ali, and for the first time, an “IMMC Excellence Award” to publicly recognize and celebrate Muslims that are doing impactful work within their local communities and beyond.

Ali’s concept for the IMMC Excellence Award is to highlight professionals for excellence in their respective fields, excellence in art and culture, and excellence in humanitarian and social justice work. The first-ever IMMC Excellence award is a posthumous award to “The Greatest of All Time”, Muhammad Ali, received by the Muhammad Ali Center in Louisville, KY, and by Ali’s widow, Mrs. Lonnie Ali. Ali’s profound legacy as a champion sportsman who transcended the world of sports to become a symbol of the antiwar movement of the 1960s and a global ambassador for cross-cultural understanding, social justice, and civility is being celebrated with this recognition.

A second award was received by Janan Najeeb, President and CEO of the Milwaukee Muslim Women’s Coalition and founder of the Islamic Resource Center & Library, the Milwaukee Muslim Film Festival, the Wisconsin Muslim Journal, and Our Peaceful Home, a domestic violence program that supports women and children in her community. Najeeb was recognized for her dedication to interfaith relationship building, advocacy for social justice and human rights, and her support of art and culture initiatives.

“The museum was able to raise over $85,000 in one evening as viewers tuned in from across the states and across the globe to join in our wonderful 20th-anniversary celebration”, said Deputy Executive Director Lina Ali. “The program felt like a Muslim ‘Oscars’, it was so beautifully produced and showcased amazing talent and artistry, we are very pleased..”, said IMMC Board Member Marianne Nsour. 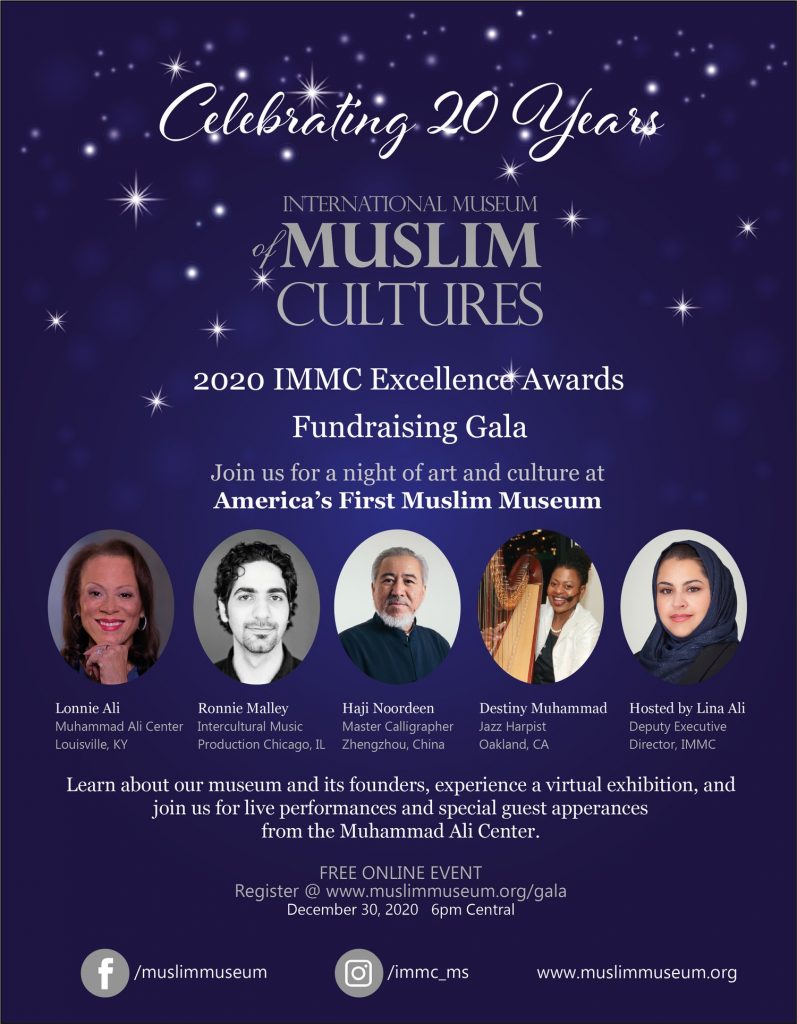 Subscribe and be the first to know about our exhibitions, events, and activities.